Humanity has three Great Desires: To be as God, to be Masters of Meaning and Destiny, to build Heaven on Earth – this is that story.

Game of Gods is comprised of five parts and fourteen chapters. Mirroring the book’s Table of Contents, the following are short descriptions with links to the first few pages from each chapter.

Brief topic listings are also included under each chapter entry, covering some of the subjects and themes.

In this section we encounter the idea of Oneness as a dominant perspective, and begin to set the stage for the ideas and arguments in Game of Gods.

Chapter One: Visions of One.

We start by attending an educational conference in 1997, the Global Citizenship 2000 Youth Congress, an event that sought to embed Oneness into the curriculum base. But what is Oneness? And how is it conceived, anticipated, experienced, advanced? Chapter one explores the concept of Oneness as a leading paradigm and worldview, even as it is often unrealized or unacknowledged as such.

We return to the Global Citizenship congress, unpacking how this event influenced attendees, and how it reflected the worldview patterns of the first truly planetized generation. This chapter is an important window into what it means to think and act as global citizens – emissaries of Oneness.

Part II provides an essential survey of the many factors that transformed Western civilization; the turbulent transition from Christendom to Modernity, from Postmodernism to Re-Enchantment – the Age of Oneness.

Our survey starts with a brief overview of Christendom’s historical and internal crisis, the impact of the Renaissance and Reformation, and the shift to secularization.

Chapter 4: The Temple of Man.

From the guillotines of the French Revolution to the Great Leap Forward, from Rousseau and Saint Simon to Marx and Darwin, from the shell holes of the Great War to the bright promises of the New Deal, we take a whirlwind tour through the causes and consequences of Modernity.

“Yes, we are going to destroy everything,” proclaimed the Soviet high priest, V.I. Lenin, “and on the ruins we will build our temple!”

As the Twentieth Century progressed, the Judeo-Christian ethos was increasingly pushed to the cultural sidelines. Forms and symbols of Modernity were also being challenged. By the 1960s a profound social shift was taking place, foreshadowed – as we explore in chapter five – by artistic movements and intellectual discussions. But as prior foundations and guiding institutions were being undermined, Western civilization wandered in a fuzzy daze of lost meaning and purpose. We questioned but were incapable – or unwilling – to accept answers grounded in past realities and traditions. The Postmodern mood was upon us.

While the Postmodern attitude was soaking into the pores of civilization, novel forms of spirituality were making inroads. Psychedelic visions, Eastern metaphysics, theosophical teachings, and mystical conceptions were wedded to human potential thinking – the New Age movement sprouted and took hold. New gatekeepers of meaning and influence arose, highlighting Self-expansion and the experiential. Even the bulwark of Modernity, the Soviet Union, found itself pulled toward the New Thinking. But could the narrative of a spiritually aggrandized Self bring the world into Oneness?

Paralleling the Postmodern mood and the New Age movement was the desire for a harmonizing story, a framework upon which to build the practical edifices of One World – or at least, a guiding narrative for global citizenship. What would be the unifying myth? How would a deeper sense of community unfold? Might a return to the primal and archaic point the way forward? Could a renewed sense of mystery and wonder provide meaning and purpose?

Oneness would be mythically situated; the quest for re-enchantment led us into the depths of a pagan garden.

In this section we unpack some of the historic, Biblical events illuminating humanity’s Three Great desires; to be as God, to be masters of Meaning and Destiny, to build Heaven on Earth. Juxtaposed is the Biblical argument of God’s otherness, our special position within creation, and the ultimate reason for hope.

Chapter 8 acknowledges the special hold that Oneness has on humanity – that it tugs at us, offering mankind an alternative paradigm based on the veneration of creation. Fundamental questions arise: Is Oneness true and Separation an illusion, or is it the other way round? Is everything part of a cosmic whole, or is God the ultimate other? Is reality One or Two? And where does our hope come from?

Genesis 3 presents us with an earth-shaking promise; that through transgression we will transform into something greater. As chapter 9 fleshes out, this pledge – first given by an angel of light – remains at the center of our human experience. Around and around we go: playing a game that spans generations, with eternal consequences.

The World City, that symbolic expression of power-in-unity, is a dream compelling us to action. From the first city mentioned in the Bible – no, it’s not Babel – to the never-built Tower of Progress, from the Palace of the Soviets to the “new architecture” preaching Oneness, a discernible theme courses through human history: Together we build the City, together we erect the Temple of Man.

Chapter 11: The Cult of World Order.

What has often been relegated to a conspiracy theory is ripped open for all to see; a long running and deeply rooted political movement, but with a twist – the belief that it can save the world. In the words of actress and advocate, Jean Stapleton, “The goal of the World Federalists is peace through unity of government. We must support their vision of oneness in diversity for it is the salvation of humanity.”

This chapter probes a profoundly important modern development, the interfaith movement. In these heavily documented pages, we travel to global summits and parliaments where religious leaders gather… to enchant one another, to embrace the new global myth, to reinforce progressive narratives, to play politics. “Oneness is the key,” it was said at the 2015 Parliament. “And if oneness is there, things change. Fast.”

Deifying information and the power of technology, we seek to shape humanity into our ideal image, and proclaim ascension through the works of our hands. Chapter 13 tracks the transhuman dream, its robust history, and the religious orientation it inevitably takes.

The following is taken from chapter 14: “Evolutionary culture, also couched as transformational culture, is an indicator of the West’s acceptance of a new outlook: The rejection of the Christian claim, and the desire for enchantment. It is aesthetic and experimental, exploring and shaping – even transgressing and repackaging – the attitudes aligned with Post-modernism, the Self of human potential, and New Age spirituality. Evolutionary culture, grounded in revolutionary social moods, reflects and refines the worldview already embedded in society.”

Part 5 is comprised of one chapter, an overview with reflections and calls to action.

“What will you put your faith in? The cult of world order? Spiritual politics? Technology? Will you look for meaning in a mystical feeling? Are you trusting in an ancient-future vision? Will you, as a compliant global citizen, proclaim the myth of Re-enchantment?

The Temple of Man beckons; come, let us build our Babel – let us play our game of gods.

Or will you place your hope in Someone who is eternally greater?” 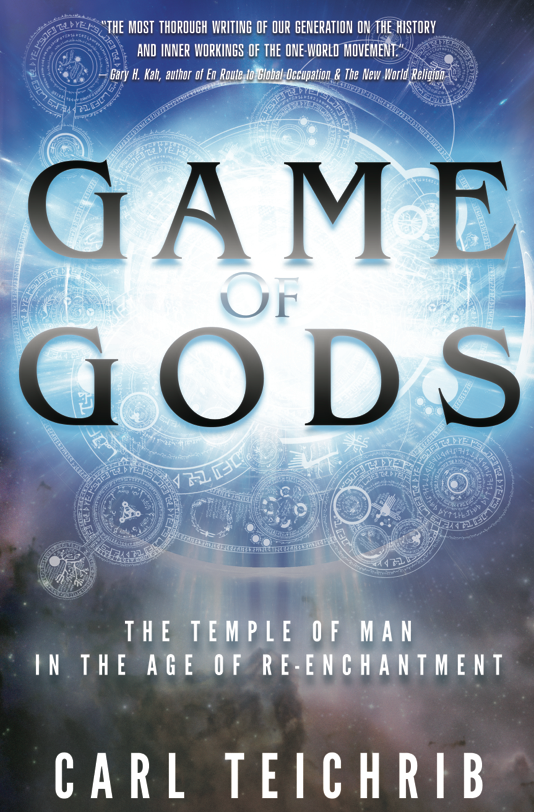 From politics to transhumanism to the interfaith movement, Western culture is quickly turning away from a biblical worldview and embracing a false gospel of Oneness. Teichrib skillfully explains the roots of this shift and how the transforming gospel of Jesus Christ is still the only hope for a world enraptured with paganism. Game of Gods is exactly the resource the church needs for such a time as this. Read it!